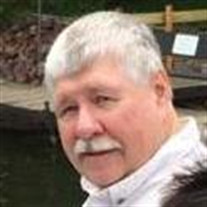 Randy L. Thompson, 62, of Humboldt, passed away December 25, 2016 at Trinity Regional Health Center in Fort Dodge. Funeral services will be 11:00 a.m. Thursday at Our Saviour’s Lutheran Church in Humboldt with the Rev. Gene Broughton officiating. Visitation is from 5-7 p.m. Wednesday at the Mason-Lindhart Funeral Home in Humboldt. Randy Lee Thompson, the son of Jerry and Joan (Jergens) Thompson, was born February 19, 1954 at Fort Dodge, Iowa. His parents brought him home to Humboldt where he was raised and educated. As a young man, Randy was interested in cars and excelled in Football at Humboldt High School where he graduated in 1972. Following his education, Randy went to work for G&H Auto Parts in Humboldt. He was united in marriage to Marlene Nissen on May 28, 1977 at Our Saviour’s Lutheran Church. Randy served as the parts man at Eggerich Chevrolet in Humboldt before going to work for NAPA Parts Store in Fort Dodge for many years until his retirement earlier this year. Randy was a member of Our Saviour’s Lutheran Church. His passion was fishing. He enjoyed attending fishing tournaments around the Midwest with Cooper, taking many fishing trips around the country, and spending his summers fishing Lake Minnewashta in Okoboji. Always a car enthusiast, Randy built and drag raced his own cars at the Humboldt Speedway and on tracks around Iowa. He enjoyed his new truck and bass boat and summers at Okoboji. Above all, Randy loved the time he spent with his grandchildren and their dog, Josie. Randy is survived by his wife of nearly 40 years, Marlene of Humboldt; his son, Cooper (Katie) Thompson of Huxley; his grandchildren, Ainsley and Oliver; his mother, Joan Thompson of Holiday, FL; his, siblings, Scott (Linda) Thompson of Humboldt, Terry (Annette) Thompson of Ames, and Diana (Mohammad) Ali of Holiday, FL; and his mother-in-law, Aleda Nissen of Humboldt. He was preceded in death by his father, Jerry Thompson; father-in-law, Gilbert Nissen; and sister-in-law, Linda Jarvinen.

The family of Randy L. Thompson created this Life Tributes page to make it easy to share your memories.

Send flowers to the Thompson family.