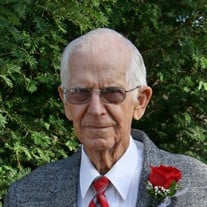 Richard “Casey” Thul, 96, of Humboldt, passed away December 5, 2017 at the Humboldt Care Center South. A Mass of Christian Burial will be 11 a.m. Saturday at St. Mary’s Catholic Church in Humboldt. Visitation is from 5-8 p.m. Friday at the Mason-Lindhart Funeral Home in Humboldt with a parish rosary at 5 p.m. Burial with full military rights will be in St. Mary’s Cemetery, Humboldt. Casey is survived by his wife of 71 years, Betty Thul of Humboldt; daughters, Georgia Elbert of Rodman, Jan (Denny) Olson of Humboldt, and Lori (Dan) Geelan of Ruthven; son, Jon Thul of Bode; 11 grandchildren; 24 great grandchildren; and sister, Rita Plathe of Algona. He was preceded in death by his parents; infant daughter, Julie; son-in-law, Mark Elbert; brother, Eugene Thul; and sisters, Clara Wagner and Amanda Kohlhaas. Richard George Thul, the son of John and Annie (Kayser) Thul, was born February 21, 1921 on a farm east of St. Joseph, Iowa. He attended St. Joseph School and graduated from Livermore High School with the class of 1938. He then attended business school at the American Institute of Business in Des Moines and following his graduation, began working in the Livermore State Bank. After the outbreak of World War II, Casey enlisted into the United States Army Air Corps and received his basic training at Miami Beach. He served as a cryptologist for the Air Corps until volunteering for the imminent invasion of Japan. Following his honorable discharge from the Pacific Theater, he returned home to work with his father on the farm. After a year, he established his own farming operations west of Algona and on October 15, 1946, he was united in marriage to Betty Foth of Bancroft. The family made their home on the farm until moving to their Thul Century Farm in 1957. In 1990, the couple moved to Humboldt where they enjoyed their retirement. Casey became a resident of the Humboldt Care Center South in 2016. Casey was a member of St. Mary’s Catholic Church and a 50+ year member of the Knights of Columbus. He was also an over 50-year member of the VFW and American Legion in Bode and served as a director for the Livermore State Bank and USBank. He loved camping and fishing and enjoyed playing cards with Betty. He became proficient with his computer and used it often for emailing, checking the farm markets and weather, and collecting family pictures. He loved all types of sports and enjoyed following the Minnesota Twins and Vikings, but especially his grandchildren’s sporting events. He and Betty looked forward to their winters in Arizona. He was an avid walker, covering many miles while reciting the rosary and was proud of his participation in the Brushy Creek Honor Flight. In later years, Casey learned many housekeeping skills and took pride in caring for Betty.

The family of Richard “Casey” Thul created this Life Tributes page to make it easy to share your memories.

Send flowers to the Thul family.