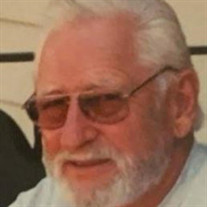 Richard Norman Williams, the son of Harold and Dorothy (Larson) Williams, was born April 1, 1931, on a farm south of Livermore, Iowa. He was raised and educated in the area of his birth graduating from Livermore High School with the “Class of 1948“. After high school Rich served in the United States Army with the 194th Field Artillery reaching the rank of Sergeant First Class. In 1950, Rich was united in marriage to Betty Johnson in the Little Brown Church in Nashua. They made their home near Hardy where they raised four children. After receiving an honorable discharge in 1952, Rich started farming near Livermore. In 1966 he operated a ski area and snowmobile business (Winter Playland) and later a golf car business until 1997, when Rich retired to just farming and being a dad, grandpa and great grandpa. Rich was a member of Rutland Trinity Lutheran Church where he served on the church council. He was also a long time 4-H leader, Humboldt Country Club member and was instrumental in starting the Humboldt County Ducks Unlimited Chapter. Rich enjoyed snowmobiling, skiing, fishing, hunting, traveling and going for coffee with friends. He was an avid motorcyclist riding his Harley Davidson to Sturgis and many local motorcycle rallies. It was never the destination but the journey that was important. Rich passed away Sunday, January 23rd, 2022, at Rotary Senior Living in Eagle Grove at the age of 90 years. He was preceded in death by his parents. Survivors include his children: James (Susan) Williams of DeWitt, Linda (Darrell) Binek of Bismarck, ND, Dennis Williams of Humboldt and Rod Williams of Humboldt; 7 grandchildren: David, Jake, Kristine, Ryan, Travis, Will and Elsie; 12 great grandchildren; brother, Virgil (Marian) Williams of Humboldt and a brother-in-law, James (Kris) Johnson of Cherokee. Funeral services will be 11:00 a.m. on Saturday, January 29th, 2022, at Our Saviour’s Lutheran Church in Humboldt. Visitation will be Saturday from 10:00 a.m. to time of service at the church. Burial will be in Union Cemetery in Humboldt. www.masonlindhart.com

Richard Norman Williams, the son of Harold and Dorothy (Larson) Williams, was born April 1, 1931, on a farm south of Livermore, Iowa. He was raised and educated in the area of his birth graduating from Livermore High School with the &#8220;Class... View Obituary & Service Information

The family of Richard N. Williams created this Life Tributes page to make it easy to share your memories.

Richard Norman Williams, the son of Harold and Dorothy (Larson)...

Send flowers to the Williams family.