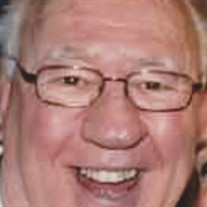 Robert James Rowe passed away at the Humboldt Care Center on 6/7/2017 after battling stroke paralysis for 2 ½ years. Funeral Services will be Monday June 12 at 3:00 p.m. at Zion Lutheran Church in Humboldt. The Reverend Aaron Flatau will officiate. Visitation will be from to 2:00 to 3:00 p.m. on Monday at the church. Robert was born January 2, 1936 to Roscoe and Evelyn Rowe. He was the only brother having three sisters Iva Jeanne, Patsy Evelyn, and Lovetta Mae. Bob graduated from Webster City High School and attended Webster City Junior College and then became a auto mechanic for Buell Oldsmobile. He married Janet Severson in 1956 and to this union had Marty, Andy, Scott. In 1963 Robert became a grain elevator manager as working with agriculture families was his passion. He managed several different elevator cooperatives to include Highview, Central City, Livermore, Manly, Rockwell City, and Randall until 1984. He then went to work for Oakland Corporation in Story City and was a key adviser and sales person during the development of grain operating software that was sold to cooperatives throughout Iowa. In 1991 Bob managed a computer software company in Des Moines and also started his own company Rowe Advertising specializing in promotional advertising. In 1980 Robert happily married Judy Seibert and they enjoyed life together until her death in 2001. Bob and Judy were active golfers in Story City and loved to travel together extensively. After Judy's death Bob moved to Largo, Florida in 2002 and lived there until May 2009 when he returned to Iowa and married Leone Hohenberger. His hobbies included flying his own airplane and also playing cards while socializing with friends. He wishes to share with you one of his favorite experiences was fishing with his sons in Canada He stated we caught a lot of fish that week and ate all we could every day. On the way home pulling the boat, Andy said Dad at the border we are only allowed so many walleyes and we have this container full of cooked fish. What do we do? So we began to eat and eat as to not get caught over the limit at the border. We all laughed about that. He also wrote that he was a Little League Baseball Coach in Livermore where Marty and Andy were his star players. Marty pitched and Andy played third base and we never got beat all year. We even beat the All Star team and we loved to play anyone any where. Robert was a kind Christian man and loved to make people laugh. He was one who could bring you into your comfort zone with his open sense of humor and laughter. He was an active member of Zion Lutheran Church in Humboldt. He is survived by his sons Marty & Anecita, Andy & Becky, Scott Jesenia. He was preceded in death by his parents and his oldest sister Iva Jeanne. He wishes to Thank You who knew him for your friendships during his life.

Robert James Rowe passed away at the Humboldt Care Center on 6/7/2017 after battling stroke paralysis for 2 ½ years. Funeral Services will be Monday June 12 at 3:00 p.m. at Zion Lutheran Church in Humboldt. The Reverend Aaron Flatau will officiate.... View Obituary & Service Information

The family of Robert James Rowe created this Life Tributes page to make it easy to share your memories.

Robert James Rowe passed away at the Humboldt Care Center on...

Send flowers to the Rowe family.