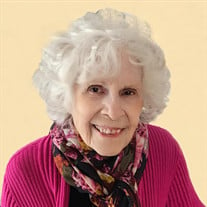 Ruth M. Fagen of Humboldt, was welcomed to her heavenly home by her Lord and Savior Jesus Christ on Tuesday morning, March 26, 2019. She was 101 Her life’s journey began in Emmetsburg, Iowa on March 6, 1918 in the arms of George and Ida Mae (McClelland) Gillpatrick. A lifelong Iowa native, she spent her formative years in her hometown and held her first job as a nanny in Spencer for the Dr. John Lippolt family. The Lippolt family proved to be very influential in her life. Ruth found one of her life’s passions, studying cosmetology in Ames, which brought her great joy in the fifty years she served as a beautician. She married the love of her life, Ardail E. Fagen on October 7, 1945 in Spencer. To this union they were blessed with four children: Jerry, Jill, Jacqueline and JoEllen. Ruth and Ardail were true entrepreneurs and worked side by side in many businesses. Their gift of hospitality was so evident through their home and work life. They farmed for many years near Sioux Rapids on the Fagen Family Farm, where Ruth also had a beauty shop. Over the years, they owned a service station, the Cottage Inn Café, the Palace Motel and Holiday Inn. The Fagen’s moved to Humboldt in 1975 where they owned the Village Kobbler until retiring in 1984. A devoted wife, mother, grandmother and great-grandmother, Ruth loved her family and friends. The gift of hospitality was truly evident in everything she did. Ruth is survived by her children, Jerry (Barb) Fagen of Arnolds Park, Jill Fagen of Humboldt, Jacqueline (Stephen) Anderson of Storm Lake and JoEllen (Jud) Coleman of Bloomington, Minnesota, her grandchildren, Jay (Laura) Fagen, Molly (Jason) Garrido, Kristie (Greg) Parks, Jody (Brad) Simpson, Katie (Justin) Kruger, Matt (Sarah) Anderson, Joel Anderson, Holly (Michael) Walsh, Jostin (Alyssa) Coleman and Joseph, Jackson and Jeffrey Coleman, 15 great-grandchildren, her sister, Dorothy Harris of Bellwood, Nebraska and special family and friends, Kenneth Gillpatrick, “J” Anita and Gary Miller. She was preceded in death by her husband, Ardail, her sisters, Cornelia, Susie & Dorothy and her brothers, Russell, Louis, Bill & Richard. Visitation will be from 5:00 – 7:00 p.m. on Friday, March 29th and the Funeral Services will be at 11:30 a.m. on Saturday, March 30th both at Oak Hill Church in Humboldt. Burial will be in North Lawn Cemetery, Spencer. www.masonlindhart.com

Ruth M. Fagen of Humboldt, was welcomed to her heavenly home by her Lord and Savior Jesus Christ on Tuesday morning, March 26, 2019. She was 101 Her life&#8217;s journey began in Emmetsburg, Iowa on March 6, 1918 in the arms of George and Ida... View Obituary & Service Information

The family of Ruth M. Fagen created this Life Tributes page to make it easy to share your memories.

Ruth M. Fagen of Humboldt, was welcomed to her heavenly home...

Send flowers to the Fagen family.