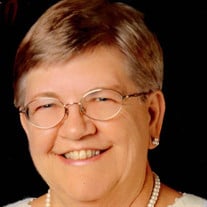 Sandra Elaine Tompkins Kraft, 78, passed away on June 24, 2019 at Trinity Regional Medical Center in Fort Dodge. She was the daughter of Tommy and Charlotte (Watnem) Tompkins, born on November 10, 1940 in Humboldt, Iowa. She lived with her mom in Bode while her father was in the service during World War II and then they settled on the family farm west of Bode once he returned. She attended Bode Public School (not including kindergarten which her children often teased her about) graduating in 1958. She moved to Humboldt to live with her beloved Grandma Sophie Engstrom and worked as a waitress at the Eateria Cafe where she met a guy named Garry Kraft. Surprisingly, she then moved to Minneapolis to work for North Central Airlines, but after a short time she returned to Humboldt because that guy kept coming up to visit and wanted her to come back home. She and Garry were married August 16, 1959 at St. Olaf Lutheran Church in Bode. They settled in an apartment in Humboldt, Garry working at Corn Belt and she working at the courthouse in Dakota City. In 1961 they got the opportunity to move to a farm west of Bode which began the 50+ years of Garry farming with Sandy right by his side. She was at her happiest when she was working with him, being a farm wife and housewife, and raising her family. She was a member of Maple Lawn Circle, was very active in the church and had a beautiful singing voice. She loved to knit and bake and care for her family. She had a wide circle of friends and loved children. In 1981 she took a job at the Post Office in Bode and loved her work because she got the chance to talk with everyone that came in. She was there for 28 years. She loved to visit and if you stopped by to see her and Garry at the farm or their house in town, there was always a pot of coffee on and baked goods that magically appeared on the table. Most recently, Sandy worked alongside Garry on the Veterans Memorial Park in Bode, putting in countless hours on the phone and talking to people to make sure that all veterans were included. Sandy is survived by her husband of 59 ½ years Garry Kraft of Bode, children Mark Kraft of Chicago, IL, teri (Scott) Doksansky of Atlanta, GA and Mike (Cari) Kraft of Blair, NE; grandchildren Adam, Hannah, Emma, Maddy, Jacob and Henry. She was preceded in death by her Grandma Sophie Watnem Engstrom, her mom Charlotte Tompkins and her beloved dad Tommy Tompkins. She was the perfect example of unconditional love and her family and friends loved her right back. Visitation will be from 5:00 P.M.-7:00 P.M on Friday June 28th at St. Olaf Lutheran Church in Bode. Funeral Services will be at 10:30 A.M on Saturday June 29th at St. Olaf Lutheran Church in Bode. Burial will be in St. Olaf Lutheran Cemetery. www.MasonLindhart.com

Sandra Elaine Tompkins Kraft, 78, passed away on June 24, 2019 at Trinity Regional Medical Center in Fort Dodge. She was the daughter of Tommy and Charlotte (Watnem) Tompkins, born on November 10, 1940 in Humboldt, Iowa. She lived with her... View Obituary & Service Information

The family of Sandra E. Kraft created this Life Tributes page to make it easy to share your memories.

Send flowers to the Kraft family.