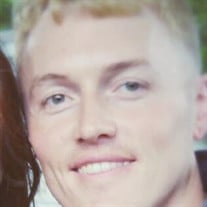 Sean T. Cerwick, 30, of Dakota City, passed away April 5, 2017. Funeral services will be 1:00 p.m. Monday, April 10th, at Oak Hill Church in Humboldt. Visitation is 4-7 p.m. Sunday at the Mason-Lindhart Funeral Home in Humboldt. Burial will be in Indian Mound Cemetery, Humboldt. Sean is survived by his mom and dad, Shelly and Tom Cerwick of Dakota City; his sister, Crystal (Billy) Downs of Humboldt; nephews, Braden and Kipten Downs; grandparents, Richard and Millie Oleson of Webster City, Barbara Oleson of Fort Dodge, and Sally Cerwick of Iowa Falls; aunts and uncles, Ron (Teri) Cerwick of Hardy, Ray (Naima) Cerwick of Perry, Randy (Windy) Cerwick of Fort Dodge, Julie (Scott) Shimon of Pocahontas, and Diana Koob of Webster City; and many cousins. He was preceded in death by his grandparents, Jim and Mary Cerwick; cousins James and Jesse Cerwick; and is at peace in heaven with his dog, Bud. Sean Thomas Cerwick, the son of Thomas and Michelle (Oleson) Cerwick, was born September 19, 1986 at Trinity Regional Hospital in Fort Dodge, Iowa. His parents brought him home to Dakota City where he began his education at McDonough’s Pre-School. He then attended Mease, Taft, Humboldt Junior High, and Humboldt High School. Sean had a happy childhood and worked hard delivering the Humboldt Reminder. He will be remembered as a beautiful artist who loved to draw. He enjoyed golf and fishing trips with his dad. AA was very important to Sean. He enjoyed his family and his many friends who he loved deeply and who will always remember his wonderful personality and sense of humor that never failed to make people laugh.

The family of Sean Thomas Cerwick created this Life Tributes page to make it easy to share your memories.

Send flowers to the Cerwick family.