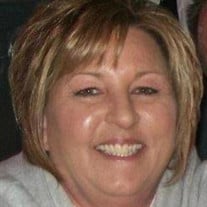 Tammie M. Marchant, 60 of Gilmore City, passed away on Thursday evening, November 5, 2020 at the Humboldt County Memorial Hospital. Tammie was born October 10, 1960 in Fort Dodge, Iowa, the daughter of Virgil and Marlene (Moser) Terwilliger. She grew up in Humboldt and attended Humboldt Schools. She was united in marriage to Gary Marchant on November 12, 1983. Tammie was employed at Twin Rivers Valley School in the kitchen and later the Humboldt Care Center South. She also worked at Dollar General in Humboldt. She enjoyed spending time with her grandkids, camping and horseback riding. She is survived by her husband, Gary of Gilmore City, her sons, Colby Marchant of Gilmore City, Devin (McKenzie) Marchant of Humboldt, her grandchildren Kinzlee, Levi, Jayden, Frankee & Ryan, her mother Marlene Hamilton of Rutland, brother Kevin (Brenda) Terwilliger of Clear Lake, step-brother Rod (Lynee) Hamilton of Mountain Lake, Minnesota, step-sister Barb (Jay) Wiuff of Bode and several nieces and nephews. She was preceded in death by her father Virgil Terwilliger, step-father Jim Hamilton and her uncle James Moser. A celebration of life will be held at a later date. The Mason-Lindhart Funeral & Cremation Service of Humboldt is in charge of the arrangements. www.masonlindhart.com

The family of Tammie M. Marchant created this Life Tributes page to make it easy to share your memories.

Tammie M. Marchant, 60 of Gilmore City, passed away on Thursday...

Send flowers to the Marchant family.