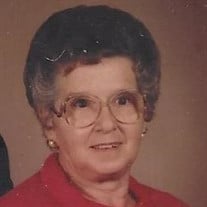 Valeria M. Greene, 95, of Las Vegas, formerly of Humboldt, passed away on Saturday, May 11, 2019 in Las Vegas. She was born March 13, 1924 in Humboldt County, the daughter of Henry and Rita (Ehrhardt) Haas. She was raised in Humboldt and attended St. Mary’s School. She was united in marriage to John Greene on August 8, 1942. The couple moved to Burlington and worked for the war effort as bomb manufacturers. Following WWII, the couple moved to Humboldt and Valeria worked in various restaurants, later owning and operating Val’s Café both in Dakota City and Humboldt. After being in the restaurant business, Val worked in the hot lunch program at St. Mary’s School. Over the last 35 years, they moved back and forth between Las Vegas and Humboldt, she managed the cafeteria for Kmart in Las Vegas. She was an active lady, enjoyed baseball, sewing, playing Keno, cooking, taking cruises, horse races and on the adventurous side, zip lines and taking hot air balloon rides. Even recently she still owned season tickets to the minor league baseball club, the Las Vegas Aviators. Valeria is survived by her children, Rozella (Edward) Thompson of Santan Valley, Arizona, John (Joann) Green Jr. and Marzella Schuldt all of Ida Grove, Thomas (Sylvia) Greene of Forsyth, Missouri, James Greene of Alta, Georgia, Teresa (Corey) Friedman of Agaura, California and Carolyn (Mark) Nice of Las Vegas, 14 grandchildren, 27 great-grandchildren and 5 great-great-grandchildren, her brother, Lawrence Haas of Boerne, Texas, her sister, Regina Rasmussen of Ames and her sister-in-law, Marie Haas of Astoria, Oregon. She was preceded in death by her parents, her husband, John, three brothers, Russell, Virgil and Robert and her grandson, Robert Westfall. Visitation will be from 4:00 – 7:00 p.m. on Friday, May 31st at the Mason-Lindhart Funeral & Cremation Service in Humboldt. Mass of Christian Burial will be at 11:00 a.m. on Saturday, June 1st at St. Mary Catholic Church in Humboldt. Burial will be in St. Mary Cemetery. www.masonlindhart.com

Valeria M. Greene, 95, of Las Vegas, formerly of Humboldt, passed away on Saturday, May 11, 2019 in Las Vegas. She was born March 13, 1924 in Humboldt County, the daughter of Henry and Rita (Ehrhardt) Haas. She was raised in Humboldt and attended... View Obituary & Service Information

The family of Valeria M. Greene created this Life Tributes page to make it easy to share your memories.

Send flowers to the Greene family.