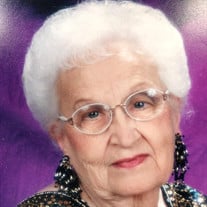 Viola Emma Hankins, 98, of Humboldt, passed away December 28, 2017 at Perham, Minnesota. A Mass of Christian Burial and celebration of Viola’s life will be 11 a.m. Saturday, January 6, 2018 at St. Mary’s Catholic Church in Humboldt. Visitation is from 10-11 am Saturday at the church with a parish rosary at 10:45. Burial will be in St. Patrick’s Cemetery on Lizard river near Clare Ia. The Mason-Lindhart Funeral Home of Humboldt is assisting the family. Viola Emma Otteson, the daughter of Albert and Emma (Sheker) Otteson, was born March 10, 1919 at Clare, Iowa. She received her education and graduated from Pioneer High School in 1936. In June of 1938, she was united in marriage to Clifford Howard Hankins and the couple made their home on a farm near Clare. During World War II, they moved to Long Beach, California where Clifford worked for Boeing Aircraft Company. After the war, they returned to Iowa and made their home on a farm near Gotch Park in Humboldt County until 1950, when the family moved to Dakota City. For 26 years, Vi served the hot lunch program at St. Mary’s School in Humboldt. She and Clifford also managed the Humboldt Country Club for a number of years. Clifford passed away in December of 1984. Vi retired in 1991. She continued to maintain her home until moving to Springvale Assisted Living in Humboldt. In 2012 Viola moved to Ottertail MN and spent the last 2 years at the Hadley Assisted Living in Perham, MN Viola was a member of St. Mary’s Catholic Church in Humboldt where she was active in many church activities. She was also a member of Wee Weavers Club, two 500-card clubs, the Birthday Club, and St. Mary’s Coffee Club. She is survived by her son, Gary (Karen) Hankins of Des Moines; daughter, Jan (Bill) Davis of Ottertail, MN; 7 grandchildren; 9 great grandchildren; and 3 great-great grandchildren. She was preceded in death by her parents; husband, Clifford; daughter Marilyn; brothers, Lawrence, Leonard, and Gerald Otteson; and sister, Gladys Gottschalk.

The family of Viola E. Hankins created this Life Tributes page to make it easy to share your memories.

Send flowers to the Hankins family.