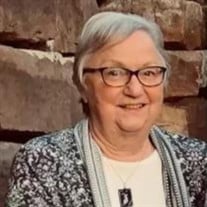 Virginia A. “Ginny” Johnson, 81, of Humboldt, passed away at Northridge Village in Ames on Monday, December 27, 2021. She was born July 16, 1940, in Burt, Iowa, the daughter of Karl and Jean (Chamberlin) Andersen. She was raised and educated in Humboldt, graduating from Humboldt High School in 1958. She earned her B.A. in 1963 at the State College of Iowa in Cedar Falls. Following graduation, she taught art education in the Ames Community School District for one year. On June 27, 1964, she was united in marriage to James A. “Jim” Johnson. The couple made their home in Gilmore City for several years while she taught in the Gilmore City-Bradgate School District. In 1966, they moved to Humboldt where they raised their family. She returned to teaching in 1985 in the Humboldt Community School District, retiring in 2000. Ginny was a strong supporter of her local community. She was a member of PEO, Faith United Methodist Church and served on numerous boards, committees, fellowship groups and booster clubs. Ginny had many hobbies and pastimes. She enjoyed china painting, sewing, quilting, knitting, crocheting, baking, gardening, reading and decorating. Her greatest joy came from spending time with her family and following her grandchildren’s activities. Ginny is survived by her husband, Jim, of Humboldt; her daughters Jennifer (Gary) Reed, Lauri (Wade) Hinners and her son Chris (Alecia) Johnson all of Ames; her grandchildren Christian, Katie and Ajay Reed; Ben and Sarah Hinners; Isabelle, Ava and Grant Johnson; her sisters Karla Forrest and Khristine Haensel and her brother Paul (Connie) Andersen. She was preceded in death by her parents. Visitation will be held from 4:00 – 6:00 p.m. on Sunday, January 2nd and a Memorial Service will take place at 11:00 a.m. on Monday, January 3rd both at Faith United Methodist Church in Humboldt. The service will be livestreamed on the Humboldt Faith United Methodist Church and the Mason-Lindhart Facebook page. The Mason-Lindhart Funeral & Cremation Service of Humboldt is in charge of the arrangements. www.masonlindhart.com

The family of Virginia "Ginny" Johnson created this Life Tributes page to make it easy to share your memories.

Send flowers to the Johnson family.