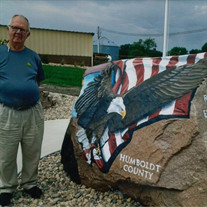 Willard “George” Lewis, 82, of Humboldt passed away on Saturday, November 28, 2020 at the Humboldt County Memorial Hospital. He was born July 6, 1938 and grew up on a farm near Craig, Nebraska, the son of William Troop and Auralia Freda (Bose). He graduated from Oakland High School in 1956. George married Joan (Thomas) Lewis June 5, 1960 in Fort Dodge, Iowa and later adopted an infant daughter, Jean Marie. He enlisted in the United States Army and served his Country from 1961 until 1968. George was a route/delivery driver for the Barrels of Fun Snack Food Company for many years retiring in 2004 then moving to Humboldt, Iowa from Valentine, Nebraska in 2005. George then began driving a tour bus for Northwest Tours and Hawkeye Stages until retiring again in 2019. George had a strong work ethic, he also picked up and delivered cars for Humboldt Motor Sales. He was a member of the Faith United Methodist Church of Humboldt. George enjoyed traveling with Joan site seeing the mountains of Yellowstone and Pikes Peak. He found great joy taking weekend trips to nearby sites. He is survived by his daughter Jean Marie Lewis and family of Yankton, South Dakota, his brother, David L. (Rebecca A.) Lewis of Defiance, Missouri and family David Scott, Tyler, Jeffrey, and Elizabeth, niece Nancy (Jim) Thomas-Mouw, nephew Harry (Jennie) Thomas and family Lindsey and Clarissa; Paul (Diane) Thomas and their family Ryan and Kelly, great nieces and nephews, Addi, Chase, Sage, Ivy, Bella and Aubrey Lewis, Sierra Thomas and Jordan Lake. George is preceded in death by his wife, Joan (Thomas) Lewis in 2003, his parents Willard and Auralia, his parent in-laws Perry and Margaret Thomas, sister-in-law Betty Thomas and her husband Dexter. Visitation will be Wednesday, December 2nd from 12:00 p.m. until the time of the 1:00 p.m. service at the Mason-Lindhart Funeral & Cremation Service in Humboldt. Burial will be in Northlawn Cemetery with Military Rites in Fort Dodge. www.masonlindhart.com

Willard &#8220;George&#8221; Lewis, 82, of Humboldt passed away on Saturday, November 28, 2020 at the Humboldt County Memorial Hospital. He was born July 6, 1938 and grew up on a farm near Craig, Nebraska, the son of William Troop and Auralia... View Obituary & Service Information

The family of Willard "George" Lewis created this Life Tributes page to make it easy to share your memories.

Willard “George” Lewis, 82, of Humboldt passed away on Saturday,...

Send flowers to the Lewis family.