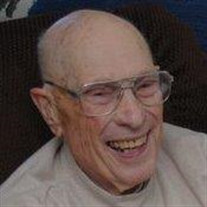 William Charles Blanchard, a life-long resident of Humboldt, passed away on Thursday, May 10, 2018, at the Taylor Hospice House in Des Moines, Iowa. He was surrounded by family members during his last few days of his life on this earth. The funeral service will be held on Thursday, May 17, 2018, at 11:00 AM at Our Savior’s Lutheran Church with the Rev Kara Baylor (Bill’s niece) officiating. Burial will be at the Union Cemetery. Visitation will be held at the Mason-Lindhart Funeral Home in Humboldt on Wednesday, May 16, 2018, from 5:30 to 7:30 PM. William (Bill) was born on August 31, 1924, to William H. and Edith (Heckart) Blanchard in the house where he was raised. He graduated from Humboldt High School in 1944 where he was known as Junior or “Bleach.” In 1945 he began working for Northwestern Bell Telephone Co. as a lineman. He worked for Northwestern Bell for 41 years, retiring in August of 1986. His responsibilities and the technology of telephone communications changed dramatically over the course of his lengthy career. Bill was active in his church and his community. He was baptized and confirmed at First Lutheran Church in 1945 and was very involved with that congregation and its successor, Our Savior’s Lutheran, in many ways. He served on Church Council, was active in Lutheran Brotherhood and was a frequent usher well into his 80’s. He was a charter member of the Humboldt Noon Kiwanis Club. He served as leader of the Webelos Den and assisted with other Boy Scout activities. He coached Little League Baseball and helped with the youth basketball league. He enjoyed working outdoors with yard work including his beautiful rose garden. He loved to play with his electric train layouts and he shared this hobby with his grandchildren. He was a great teacher when it came to figuring out a problem with a construction or wiring problem. He would make you smile with his constant quips and observations. Bill is preceded in death by his spouse, Helen (Sorlien), his parents and his brother, Harvey. He is survived by his five children: Stephen (Gracia) Blanchard, Coralville, IA; Alan (Maureen) Blanchard, Humboldt, IA; John (Deb) Blanchard, Johnston, IA; Dennis (Jill) Blanchard, Roanoke, VA; and Ann (Mark) Kvale, Sparta, WI. Survivors also include 12 grandchildren; 15 great grandchildren; and 2 great-great grandchildren. He loved and was loved by his grandchildren: Matthew, Sara, Christopher, Philip, Beau, Robert, Billie, Michael, Michelle, Aaron, Jacob and Caleb. His great grandchildren came to love him as well: Taylor, Lydia, Gabrielle, Owen, Mason, Chase, Kiernan, Kael, Kendrick, Reichen, Karmyn, Peyton, Reese, Beckham and Faith. Great-great grandchildren, Charlotte and Arne, also found a place in his heart. In lieu of flowers memorial contributions may be made to the Humboldt Kiwanis Club.

William Charles Blanchard, a life-long resident of Humboldt, passed away on Thursday, May 10, 2018, at the Taylor Hospice House in Des Moines, Iowa. He was surrounded by family members during his last few days of his life on this earth.... View Obituary & Service Information

The family of William C. Blanchard created this Life Tributes page to make it easy to share your memories.

Send flowers to the Blanchard family.